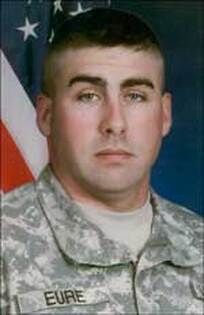 SSG Ronald Eure was born February 8, 1984 in Ahoskie, NC.  As a child he dreamed of becoming an Army Cavalry Scout and in 2004, that dream came to fruition.  During his time as a soldier, he served at Fort Hood, TX; Fort Knox, KY; Fort Benning, GA; Camp Casey, Korea; and deployed twice to Iraq.  He earned numerous medals and honors throughout his career.

Ronald was a proud soldier and loving husband.  After graduating from high school, Ronald enlisted in the Army and he married his high school sweetheart, Hannah.  While Ronald was stationed in Korea on a hardship tour, he was given the devastating news that he had stage 4 esophageal cancer.

Ronald passed away on May 16, 2015 after a courageous battle with esophageal cancer while still on active duty.  He is survived by his wife, Hannah, and three children.  We were honored to meet Hannah in 2018 at a Survivors of Heroes Retreat and she graciously returned in 2021 to volunteer as a Retreat Facilitator.
Copyright © 2021 Holbrook Farms Retreat
Support Us