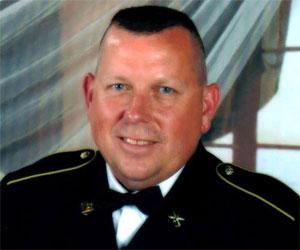 SSG Jeff Keas had wanted to join the military soon after he married his wife but his father convinced him not to.  Many years later, he was at a San Diego Padres baseball game and they asked all those who served in the military to stand.  He was emotional because he was not able to stand, so when he returned home to Oklahoma he enlisted.  Due to his age, the Army was the only branch who would take a 38-year-old.  The recruiter informed him that he needed to lose weight so he got a trainer and walked back into the recruiter’s office a few months later where he met the requirements.  The family was sent to Fort Hood, Texas and he was soon deployed to Iraq.  After he returned from his deployment, Jeff was sent to South Korea.  Jeff had just finished up his first year stationed in Korea when he was diagnosed with cancer.  He was immediately sent to San Antonio, TX to receive treatment.  He battled for a year but passed away on July 5, 2013.

Jeff is survived by his wife, Shelley, and two sons, his parents and sisters.  We were honored to meet Shelley in 2017 at our Survivors of Heroes Retreat.
Copyright © 2021 Holbrook Farms Retreat
Support Us