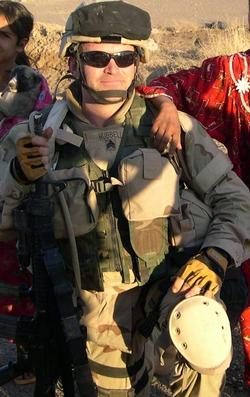 SSG Darren Hubbell was born September 2, 1968 in Jacksonville, Florida and loved his Florida sports teams. He was a 14-year Army veteran and a senior line medic that had also served tours in Panama and Afghanistan.  He met his wife, Dana, in 2006 and their first official date was at his military ball.  They fell in love fast and were married January 13, 2007. Right after returning from their honeymoon, they received notification that Darren would be returning to Iraq early for his 4th tour to Iraq and his 6th overall.

Darren was dad to his two children and was even deployed in Iraq with his son when he was killed. He was also dad to Dana’s two sons.  Darren loved to laugh and was always joking.  He was also a big history buff.
​
He was killed June 20, 2007 by a roadside bomb in Baghdad, Iraq.  His widow Dana joined us at Holbrook Farms Retreat in 2018 for a Survivors of Heroes Retreat.
Copyright © 2021 Holbrook Farms Retreat
Support Us