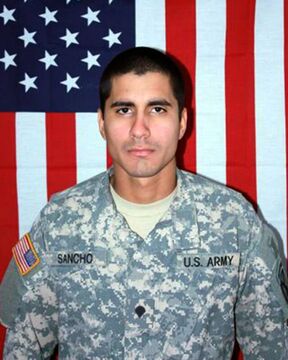 Spc. Jeremiah T. Sancho was born April 28, 1988.  He used to play in his grandfathers oversized military uniform as a child.  Jeremiah went from playing in his grandfather’s uniform to joining the JROTC program at Palm Bay High in Florida where he graduated from high school in 2007.  He joined the Army because jobs were few but he came to love the Army.  Soon after joining the Army, Jeremiah married his wife, RaiAnne.  Jeremiah loved video games, comic books, playing the bass guitar and drums.

Jeremiah was killed October 13, 2011 at the age of 23 of injuries caused by an IED in Lam, Kandahar Province, Afghanistan.  He is survived by his wife, RaiAnne, and children.  We were honored to meet his wife RaiAnne in 2017 at our Survivors of Heroes Retreat.
Copyright © 2021 Holbrook Farms Retreat
Support Us