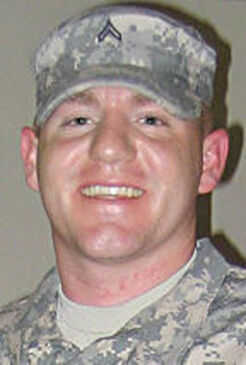 Sgt. Blake Stephens was born September 28, 1981 in Pocatello, Idaho.  He was the youngest of five children.  He earned his Eagle Scout rank in 1998 and graduated high school in 2000. His childhood was spent running around the hills around Pocatello

He joined the Army National Guard at the age of 17 before he graduated from high school.  He took a leave of absence from the National Guard to serve on a mission to the Netherlands and Belgium. After the 9/11 attacks, Blake was recalled and he volunteered to join a deployment.  That deployment was to Hill Air Force Base in Utah to help guard the base.  While there, he met and married his wife, Erin Dructor, who was in the Air Force serving as a security forces airmen.  When his commitment to the National Guard ended, Blake took a six month break where he was a tattoo artist and started a rock band.  He missed the Army and joined the U.S. Army.

In March 2007, Blake was deployed to Iraq assigned to Headquarters and Headquarters Company, 3rd Brigade Combat Team, 3rd Infantry Division. Blake was killed May 8, 2007 in Iraq when an IED detonated near his vehicle.  He is survived by his wife, Erin, his parents, and siblings. We were honored to have met Erin in 2016 at our Survivors of Heroes Retreat.
Copyright © 2021 Holbrook Farms Retreat
Support Us