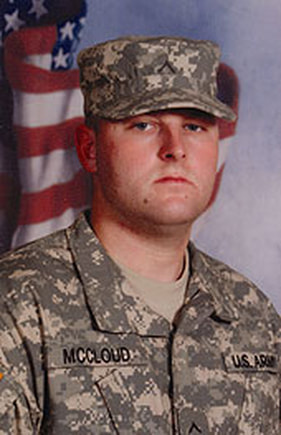 Pfc. Christopher M. McCloud was born on January 19, 1983 in Athens, GA.  Chris lived his entire life in the same town where he graduated from high school and attended community college.  In 2006, Christopher joined the U.S. Army and was a cavalry scout for the 1st Calvary, 3rd Brigade, 6th Squadron, 9th Regiment our of Fort Hood, TX.  He joined the military because he wanted to serve his country, set an example for his kids, and wanted a better life for his family.

Christopher loved music, dirt bike racing, firearms, and gaming.  He loved to help anyone in need and went to New Orleans after Hurricane Katrina to help out.  Christopher met his soon-to-be wife, Sheena, at a church function when he was 15 and she was 12.  She was drawn to him because “he would do anything to make people laugh”.

Christopher was killed on September 14, 2007 from wounds sustained when an IED detonated near his vehicle in Muqdadiyah, Iraq.  He is survived by his wife, Sheena, two sons, his parents and siblings.  We were honored to have met Sheena in 2015 when she attended a Survivor of Heroes Retreat.
Copyright © 2021 Holbrook Farms Retreat
Support Us