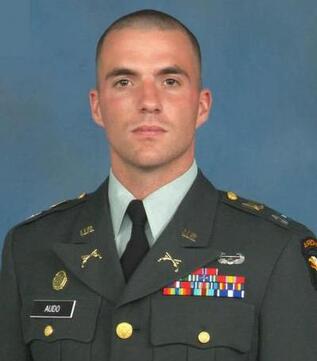 Maj. David L. Audo was born September 9, 1974. He graduated from St. Joseph-Ogden High School in Illinois and went on to graduate with distinction from the University of Illinois ROTC program with a degree in Architecture.  David was a highly educated and decorated soldier. He earned a Master’s degree in Business and Organizational Security Management from Webster University, and was a graduate of the United States Army Military Police School, the U.S. Army Command and General Staff College, and the Defense Language Institute's Foreign Language Center. David had been awarded two Bronze Stars for meritorious service during combat operations in Iraq and Afghanistan, the NATO Medal for two tours in Kosovo, four Army Achievement medals, two Army Commendation medals, two Meritorious Service medals, as well as numerous other awards.

David enjoyed fast cars and motorcycles but his highest priorities were always reserved for his wife and children.

David passed away October 27, 2009 in Baghdad, Iraq from injuries sustained from a noncombat-related incident.  He is survived by his wife, Rebecca, two children, and siblings. Rebecca joined us at Holbrook Farms Retreat in 2018 for a Survivors of Heroes Retreat.