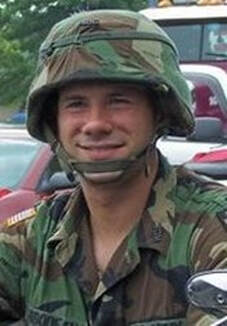 CW2 Chris R. Thibodeau was born October 3, 1982 in Norwood, MA and raised in New Hampshire until he moved to Ohio in high school.  Chris excelled in baseball, soccer, Boy Scouts and 4H.  He graduated from high school in 2000 and attended Case Western Reserve University and enlisted in the Army Reserves.  Since the age of 8, he had dreamed of learning to fly after watching the Blue Angels with his father and grandfather, both veterans.  Upon graduation from college in 2004, he began his quest of joining the active duty Army to attend pilot training.

In 2006, while on a temporary duty assignment in Florida, he met his future wife, Leesandra.  He had set a goal to attend flight training and learn to fly the Apache helicopter.  He worked hard to earn that privilege and graduated from pilot training as an Apache pilot.  The next goal was marrying Leesandra, which they did on June 12, 2010.  Chris deployed a few weeks after their wedding.  Since 2009, he was assigned to the 1st Battalion, 4th Combat Aviation Brigade out of Fort Hood, TX. Chris’ awards and decorations include an Air Medal, two Army Achievement Medals, National Defense Service Medal, Global War on Terrorism Service Medal, Afghanistan Campaign Medal, Armed Forces Reserve Medal, Noncommissioned Officers Professional Development Ribbon and Army Service Ribbon.

Chris got to return home for his two weeks of R&R and once he had returned to Afghanistan and two weeks before he died, Chris learned that his wife was expecting their first child.  He was so excited and was researching baby products and sharing the good news.  Chris was known as a very happy guy that had happiness and love shining out of him.

Chris passed away on May 26th, 2011 while serving in Afghanistan in a helicopter crash during combat operations.  He is survived by his wife Leesandra, son, parents, and siblings. We were privileged to meet Leesandra at a Survivors of Heroes Retreat in 2019.
Copyright © 2021 Holbrook Farms Retreat
Support Us