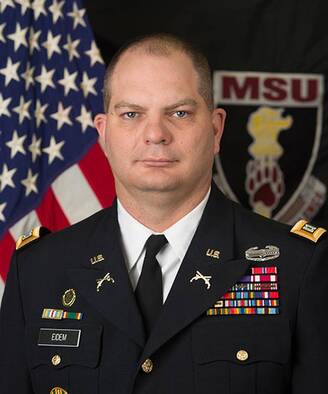 Captain Aaron Eidem as born on April 29, 1978 in Steamboat Springs, CO.  He graduated from high school in Auburn, WA in 1996 and immediately enlisted in the U.S. Army.  Aaron received his Bachelor of Science degree and eventually his Masters degree.  Aaron deployed three times to Iraq and was recognized for his leadership and excellence in doing his job earning a Bronze Star and Purple Heart.  He served his country in the Army for almost 20 years as a military police officer and instructor.  At the time of his death, he was an adjunct faculty member and assistant professor of military science at Missouri State University.

Aaron was a devoted husband and father and made it his priority to spend as much time as he could with his family.  He enjoyed hunting with his father and making those special memories together.

Aaron passed away on February 18, 2016 from injuries sustained in an auto/pedestrian accident when he was trying to save a stranded motorist.  He made the ultimate sacrifice while trying to help others.  He is survived by his wife, Amber, three children, his parents, and siblings.  We were honored to meet Amber in 2019 at our Survivors of Heroes Retreat.  A portion of Interstate 44 in Missouri, where he was killed, has been named the “Captain Aaron J. Eidem Memorial Highway” in honor of his service and sacrifice.