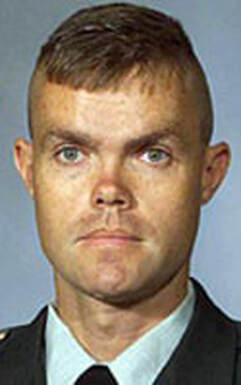 1st Lt. Robert Henderson II was born January 12, 1971. He graduated from Warren Central High School in Kentucky and attended Western Kentucky University where he studied business management.  Robert joined the Kentucky National Guard when he was 17 years old, still in high school.  He loved serving his community, state, and country and proudly did so for 16 years.

Robert was also a sales manager at Lowe’s Home Improvement store in Henderson, KY.  He was known as someone who would do extra work to help people.  He was a platoon leader in the Kentucky National Guards Detachment 1, 2123rd Transportation Company that hauled heavy equipment, including tanks, armored vehicles, artillery equipment and engineering equipment and deployed in support of Operation Iraqi Freedom.

Robert was killed April 17, 2004 when his convoy came under attack in Diwaniyah, Iraq.  His actions in that attack “probably saved hundreds of lives” and he was posthumously awarded the Bronze Star and the Purple Heart, as well as a Kentucky Distinguished Service Medal.  He is survived by his wife, Lisa, and child that was born after he passed away.
Copyright © 2021 Holbrook Farms Retreat
Support Us