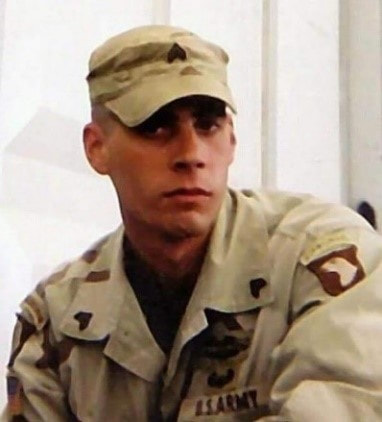 Christopher Schornak was born November 1, 1977 and from the day he was born he was the life of the party.  He knew from a young age that he wanted to join the Army so he prepared and lived his life until he could.  He earned his Eagle Scout rank, he participated in JROTC in high school and upon graduating from Pope High School in Marietta, GA in 1996 he enlisted in the U.S. Army.  His first assignment was in Germany and then returned to the U.S. at Fort Campbell, KY where he was a part of the 327th Infantry Company.  While at Fort Campbell, Christopher met his future wife, Robyn, and they married on October 31, 2002.  The following March, when Robyn was 8 months pregnant with their first child, Christopher deployed to Iraq.

Christopher got to come home in October 2004, for two weeks of R&R where he got to meet his son.  After that deployment, Christopher had served 8 years in the Army and decided that his family was too important and did not want to leave them so he did not want to reenlist.  Christopher got out of the Army the summer of 2004 and the family moved to Alabama to be close to his parents.  He worked construction but was not happy and shared with his wife how much he missed the Army, his soldiers, putting on the uniform each day, even early morning PT, but “mostly he missed living with a sense of purpose and pride, knowing that he was changing the world.” The next week, Christopher reenlisted in the Army and the family moved to Fort Hood, TX a part of the 4th Infantry Division.

December 2005, Christopher was deployed back to Iraq. He was killed on February 26, 2006 when his squad was ambushed while on routine patrol of Baghdad.  He is survived by his wife, Robyn, and his son.  Robyn first joined us at Holbrook Farms Retreat in 2015 and returned multiple times as a Facilitator.
Copyright © 2021 Holbrook Farms Retreat
Support Us