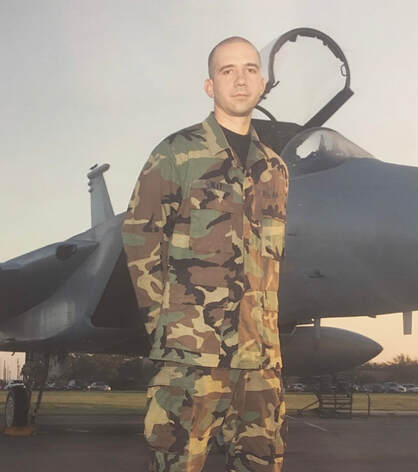 SrA James Henley was a man of great character, perseverance and love for his wife and family. James overcame a difficult childhood to co-own a window-washing business with his childhood friend but had much higher goals for himself.  After the September 11, 2001 attacks he went back and earned his high school diploma and started discussions with various military recruiters.  He wanted a chance to better his life and enlisted in the U.S. Air Force.   He was stationed at Elmendorf Air Force Base in Anchorage, Alaska in 2003 and became a crew chief on the F-15.

He was fascinated with aviation and quickly earned a bachelor’s degree from Embry-Riddle Aeronautical University and wanted to apply for an officer candidate program so he could become a pilot himself.  He was also studying for the LSAT’s, with a dream of becoming a lawyer.

He met his wife Annaliese and they were married in August 2004 and welcomed a son in 2005.  In 2006, James was diagnosed with stage 4 Burkitt’s-like lymphoma and he underwent chemo to fight for his wife, son, and unborn daughter. James died on May 21st, 2007.

​We were privileged to meet Anneliese at a Survivors of Heroes Retreat in 2017.
Copyright © 2021 Holbrook Farms Retreat
Support Us