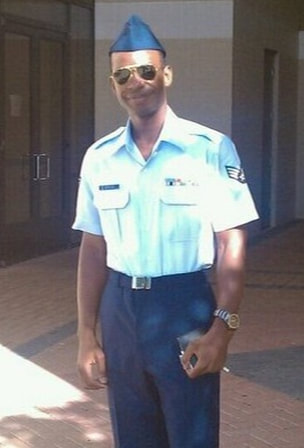 SrA Gilnord Charles was born August 26, 1981 in Haiti.  When his mom passed away, he was raised by his grandmother in Haiti. He then came to the United States at the age of 8 to join his father, step mother and six siblings.  He graduated from high school in Maryland and then served six years in the National Guard, specializing in civil engineering.  After his honorable discharge from the National Guard, Gil received a Bachelor’s degree in Criminal Justice from the University of Maryland Eastern Shore.

In 2009, Gil married his wife, Danielle, and they were blessed with two children of their own.  Gil was also an amazing step-father to a daughter.

Gil’s dedication to his country led him to re-enlist in the U.S. Air Force Reserves in 2010.  He always asked where he could best serve. “Gil had the traits and characteristic that military embodies, his views and the military ideals of honor, courage, and commitment are so closely aligned.”

On January 14, 2011, Gil was on a fitness test run for part of his application to become a Baltimore police officer when he collapsed and passed away.  He is survived by his wife, Danielle, and children.