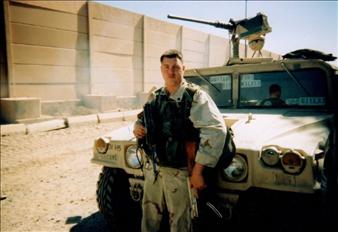 SPC Steven R. Givens was born March 16, 1979 in Texas.  He spent most of his life in Mobile, Alabama and North Carolina.  As a young child, he always knew he wanted to serve in the military.  He enjoyed sports, video games, movies, and time with his family.

Steven’s first deployment was to Iraq in 2002, where he faced intense combat as part of the 3rd Infantry Division’s first wave into Iraq.  He was known as a man who loved to help children in Iraq and had volunteered to deploy for his second tour in Iraq in 2005 so he could serve his country and help the children on the streets.  He asked his friends and family to send him Mardi Gras beads and candy so that he could give them to the children in Iraq.  Steven was awarded the Bronze Star and Purple Heart posthumously.  He served his country in the Army for 8 years until his death.

Steven passed away May 8, 2005 from injuries sustained from enemy small-arms fire near Balad, Iraq. He is survived by his wife, Cayssia, whom he wed 3 days before his deployment, and their son.  We were honored to meet Cayssia in 2016 at a Survivors of Heroes Retreat. She graciously came back to serve as a Retreat Facilitator in 20xx and attend Alumni Retreats.
Copyright © 2021 Holbrook Farms Retreat
Support Us