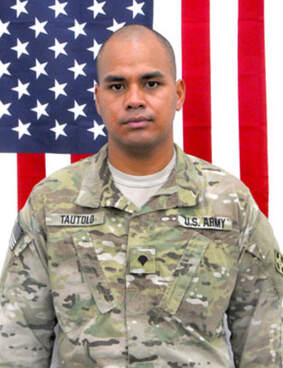 Sgt. Tofiga Tautolo was born August 31, 1988 in Pago Pago, American Samoa.  He joined the U.S. Marines right out of high school and then enlisted in the U.S. Army four years later.  While a Marine he was deployed to Iraq in 2008 and to Afghanistan in 2009.  He served as a Cavalry Scout, driver and gunner.  His awards include a Bronze Star and the Purple Heart.  His final deployment to Afghanistan he was assigned to 3rd Squadron, 61st Cavalry Regiment, 4th Brigade Combat Team, 4th Infantry Division out of Fort Carson, CO.

Tofiga was always the life of the party. He was well loved and respected by others.  He liked to tease his fellow soldiers when they challenged him to a weight lifting contest and he won that “You know you should never challenge a Samoan to a contest of strength.”

Tofiga was killed on May 27th, 2012 from wounds caused by an enemy IED in Afghanistan. He is survived by his wife, Rita, and one child. We were privileged to meet Rita at a Survivors of Heroes Retreat in 2019.
Copyright © 2021 Holbrook Farms Retreat
Support Us