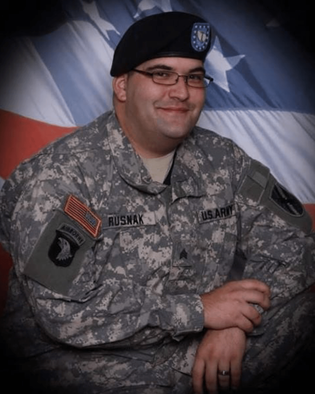 Sgt Randell Rusnak was born August 13, 1979. Randell served his country in the U.S. Army from 2001 until 2004 at Fort Campbell, KY.  During his active duty time, he deployed to Iraq.  After his four years on active duty, he left and joined the Georgia Army National Guard. Randell was Past Master of Lawrenceville Masonic Lodge #131 F. & A.M., a member of the Order of the Eastern Star and order of the Amaranth, and was a member of the Lawrenceville VFW Post 5255.

Randell passed away too soon from injuries sustained while deployed to Iraq on November 3, 2011. He was exposed to the burn pits in Iraq and came home with a multitude of health issues that he eventually passed from while at home with his wife and his 3-month old daughter. We were honored to meet his widow, Kristi, in 2018 at our Survivors of Heroes Retreat.