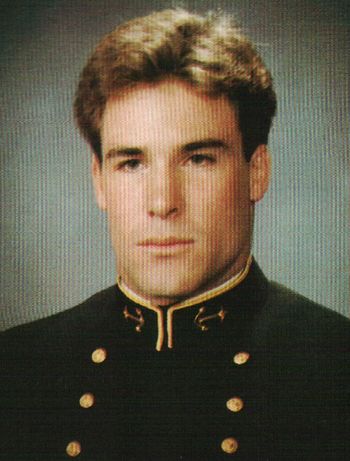 Major Tim Curry was born October 26, 1963 and grew up in New Jersey.  In high school he was voted “Most Likely to Succeed” and “Most Athletic”.  He graduated from high school in 1982 and was on the honor roll and was inducted into the South Jersey Wrestling Hall of Fame in 1998.  After graduating from high school, Tim knew he wanted to go to the U.S. Naval Academy and it was there that he knew flying was his passion.  Tim graduated from the U.S. Naval Academy and went onto pilot training.  He flew in 40 combat missions in the Persian Gulf War and was a Marine Top Gun flight instructor.

Tim passed away March 10, 1999 when his F-18C jet crashed in the Alaska Range.  He was assigned to the Marine fighter Attack Squadron at the Marine Corps Air Station at Iwakuni, Japan and was in Alaska for a training exercise.  He is survived by his wife, Karen, two children, his parents, and siblings.  We were honored to meet Karen at a 2019 Survivors of Heroes Retreat.