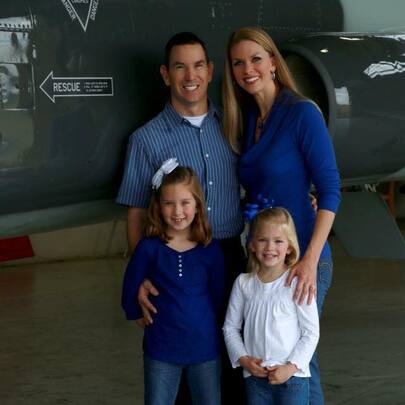 Major Rick “Tracer” Schafer was a loving husband, father, and decorated Air Force pilot with over 2,000 flight hours in the F-16 and T-38.  He excelled in all that he did from flying combat missions over Bosnia, Kosovo, Iraq and Afghanistan to preparing future fighter pilots for combat as in instructor pilot.

Rick met his wife, Ashley, while in high school in Austin, Texas.  After high school graduation, Ashley stayed in Austin to work and go to school and Rick went to Colorado Springs to pursue his dream of attending the US Air Force Academy.  After graduation, they were married in July 2001.  The Air Force took the couple on some wonderful adventures around the world that Ashely will always treasure.  Rick and Ashley were blessed with two beautiful girls that “turned their house pink and sparkly and their macho fighter pilot dad into a professional at putting hair into ponytails.”

Rick was tragically killed, alongside his brother, in their private airplane over Labor Day weekend in 2014 while on a family vacation.

Ashley first attended a Survivors of Heroes Retreat in 2017 and returned as a Facilitator in 2018 and our Alumni Retreat in 2019.
Copyright © 2021 Holbrook Farms Retreat
Support Us