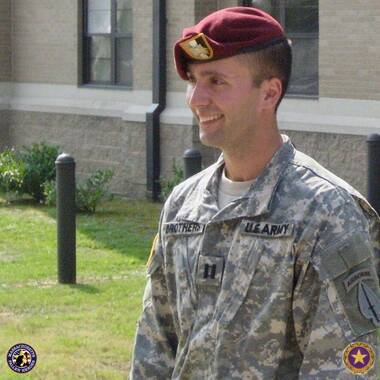 Maj Steven Brothers was born July 26, 1976 in Potsdam, NY.  His family moved to Bloomington, IN where Steven graduated from Indiana University in 1998.  After graduation, he was commissioned into the U.S. Army where he began his career as an Infantry Officer.  After a few years he completed Intelligence school and was assigned as the 5th Psychological Operations Battalions Intelligence Officer where he wrote the only psychological operation component plans in existence within the Department of Defense.  Next, Steven excelled as a Commander of the Headquarters Company 4th PSYOP Group in Fort Bragg, NC.  He was then selected to become a Foreign Area Officer where he had to learn Arabic and graduated top in his class in 2008 at the Defense Language Institute.  He was then assigned to the U.S. Embassy in Morocco.  He traveled extensively throughout the region and earned awards for leading, planning, and coordinating the largest bilateral joint military land exercise on the African continent.  After that assignment, Steven was accepted by three Ivy League Graduate Programs and the Army Human Resources Command to attend Harvard University in 2009.  After graduating from Harvard in 2011 with a Masters in Middle East studies, he was assigned to the U.S. Embassy in Qatar to work as the Deputy Chief of the Office of Military Cooperation.

Steven passed away on May 30, 2012 after a courageous battle with leukemia. He is survived by his wife of 12 years, Maggie, and his parents.  We were so blessed to meet Maggie in 2017 at our Survivors of Heroes Retreat.
Copyright © 2021 Holbrook Farms Retreat
Support Us