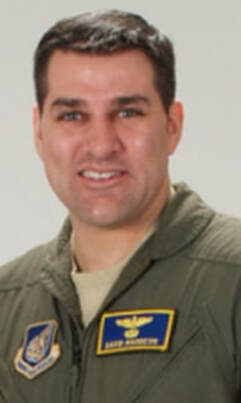 Major Dave Brodeur was born on December 10, 1976 in Worcester, MA.  Dave graduated from high school with honors in 1994.  He went on to graduate from Valley Forge Military Academy and College in 1995, and the US Air Force Academy where he graduated in 1999 with a degree in Political Science.  He also earned a Master of Business Administration and Management from Touro University and completed Air Command and Staff College.  Major Brodeur graduated from pilot training at Columbus Air Force Base in Columbus, MS in April 2001 and then graduated from F-16 training at Luke AFB, AZ.

Dave was an experienced F-16 pilot with deployments to Iraq where he flew combat missions during the initial days of Operation Iraqi Freedom.  He was a senior F-16 pilot with over 1,600 flight hours in fighter aircraft. Among his commendations and awards are the Bronze Star, Purple Heart, Meritorious Service Medal, Air Medal, and Combat Action Medal.

Dave loved his country and flying but his greatest love was his family.  He was a devoted husband to his wife of 11 years, Susan, and father to his two children.  He was killed April 27, 2011 at Kabul Airport when an Afghan opened fire.  He was assigned as an advisor to the Afghan Command and Control Center under the NATO Air Training Command.
Copyright © 2021 Holbrook Farms Retreat
Support Us