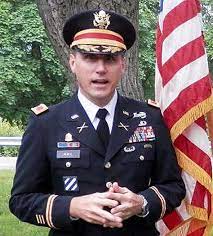 Col Eric Kail was born August 13, 1965 in Germany.  He grew up in a military family and attended Radford University and commissioned through the Army ROTC program there in 1988 into Field Artillery.  While stationed in Germany, he deployed for Operation Desert Storm.  Once Eric returned home, his earned his Master’s degree in Behavioral Science and Counseling and was a Tactical Officer at West Point.  His next assignment was a two-year stint with the 75th Ranger Regiment, deploying in support of Operation Iraqi Freedom.  Once again from that deployment, Eric earned his PhD in Organizational Psychology and served on the faculty at West Point teaching Military Leadership.

During his military career, he commanded multiple organizations and served at several levels of responsibility in conventional and special operations units. He served in 18 states, Europe, Africa, Asia, and the Middle East. His combat experience included service in Desert Shield, Desert Storm, and Operation Iraqi Freedom. His awards include the Legion of Merit, Bronze Star Medal with "V" Device for Valor, the Meritorious Service Medal, the Parachutist Badge, the Air Assault Badge, the Combat Action Badge, and the Ranger Tab.

In 2021, he was diagnosed with bladder cancer and passed away on July 24, 2013.  He is survived by his wife, Gigi, and 2 children.   Eric was an avid hunter and fisherman and loved coaching his kids’ baseball and lacrosse teams. Gigi attended a Survivors of Heroes Retreat in 2017.
Copyright © 2021 Holbrook Farms Retreat
Support Us