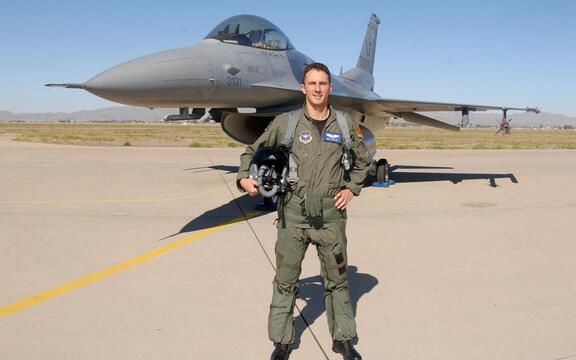 Captain Eric “Dirk” Ziegler was born December 4, 1980 in West Fargo, ND.  After graduating from West Fargo High School, he graduated from the U.S. Air Force Academy in 2003 with his wife, Sarah, also from Fargo, North Dakota.  Eric was a humble man with a strong faith.  He and Sarah met in 1998 when they both attended the Summer Scientific Academy at the U.S. Air Force Academy.  Their mothers worked together at a hospital and made sure they knew each other would be at the Academy together.

After graduation, he was assigned to Kunsan Air Base, South Korea for 14 months, then Spangdahlem Air Base, Germany where he and Sarah were stationed together and then Nellis in Nevada.  He had flown over 1,300 hours throughout his career, primarily in the F-16. During those assignments, he flew more than 300 combat hours on three deployments. While at Spangdahlem, Sarah managed the same F-16 jets that Eric flew.  They deployed together in 2009 in Iraq where they celebrated their 5th wedding anniversary with dinner in the chow hall at Joint Base Balad.

In 2010, Eric joined the 442nd Test and Evaluation Squadron at Nellis Air Force Base and had just been selected to attend the elite Air Force Weapons School.

Eric was killed June 28, 2011 during an F-16 training exercise in the Nevada desert before starting Weapons School.  Eric is survived by his wife, Sarah, and daughter; parents and sister.
Copyright © 2021 Holbrook Farms Retreat
Support Us